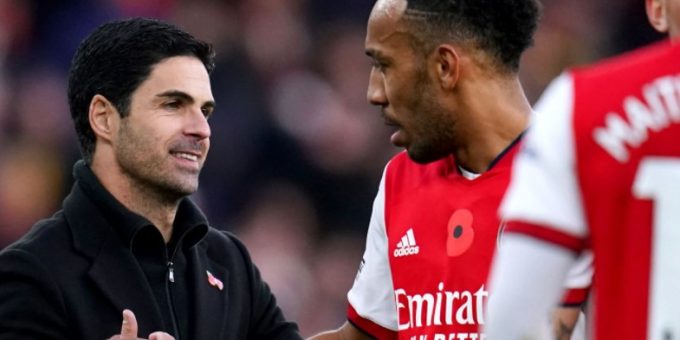 Mikel Arteta has hit back at Pierre Emerick Aubameyang’s suggestion that he was the problem after the striker left the club to join Barcelona.

Aubameyang left Arsenal for Barcelona on Deadline Day after being stripped of the captaincy at the Emirates in December following a disciplinary breach.

Speaking at his official unveiling as a Barcelona player last week, Aubameyang said: “I think it was a problem just with him [Arteta]. I can’t really tell you much. He wasn’t happy and that was it. I can’t say anything else because that’s what happened. I wasn’t very happy and I’m better this way.”

Asked about those comments ahead of Thursday’s trip to Wolves, Arteta said: “It’s his opinion. That’s his opinion, that is what he said and you have to respect that.

“I am grateful for what Auba has done at the club and his contribution since I have been here. The way I see myself in that relationship is the solution, not the problem.

“What I am saying is that I’ve been this solution, 100 per cent, I can look in the eye of anybody.

“I do lot of things wrong, for sure. But the intention all the time is the best – and not for me, it is for the club and for the team.

“I think it ended up in the best possible way for everybody. I think when things change, and the context changes and this is part of football.

“And what we did yesterday or a month ago is not relevant, it’s about what we do today and what we are going to do in the future. You have to make decisions. We all made the decision that the best thing was to move on and now he plays for Barca.

“We had different meetings and the decision was taken collectively between the player, the club and agent.”

Aubameyang’s exit means Arteta will finish the season with just two recognised strikers in his squad, with both Eddie Nketiah and Alexandre Lacazette out of contract in the summer.

Arteta said ahead of the trip to Molineux that the pair are capable of delivering the goals for his team, insisting he trusts all of his players.

Reflecting on the January transfer window and how Arsenal will cope for the remainder of the season, Arteta said: “Auba’s trajectory at the club and the importance of his goals was unquestionable. But we have other players and we believe we have other qualities in different ways to try and accomplish the number of goals we need in the team. That is what we are going to try and do.

“We did what we believe is the right thing to do with players who had to leave, contract situations were [also] catching up in those situations and we had to be fair.

“We had a clear plan of what we could do, and then it has to be doable. But we are very clear, we only want the best players and the best people at this club. We decided not to rush.”

Arsenal are sixth in the Premier League on 36 points after 21 matches, two points ahead of eighth-placed Wolves.