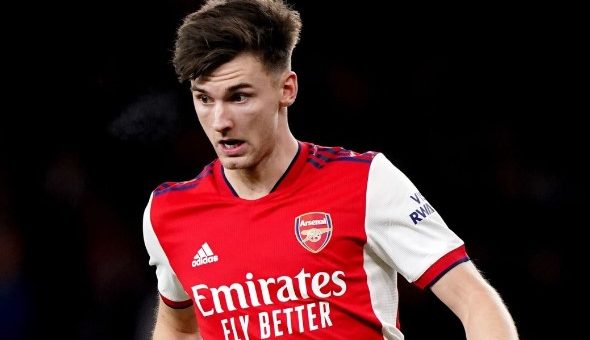 Kieran Tierney is set to miss the rest of Arsenal’s season after being told he requires knee surgery.

The Scotland full-back did not play in Arsenal’s 3-0 defeat to Crystal Palace on Monday night after reporting pain in his knee at training on Thursday.

Tierney had been playing with discomfort in the area before he joined up for international duty, and subsequently played every minute of Scotland’s friendlies against Poland and Austria.

Gunners boss Mikel Arteta admitted on Monday the news about Tierney’s fitness was “not positive”, and Arsenal have now confirmed Tierney will have an operation.

It is not known if he will be fit for Scotland’s World Cup play-off semi-final with Ukraine – likely to be played in June – as Steve Clarke’s side aim to qualify for their first edition of the global tournament since 1998.

More immediately, the Gunners will lose a key player – another blow on the back of their loss to Palace on Monday Night Football.

A statement from Arsenal read: “A specialist consultation took place on Tuesday, and as a result of further discussions with Kieran and our medical team, it has been decided that Kieran requires surgery to his knee. This procedure will take place in London in the forthcoming days.

“Kieran’s rehabilitation programme will start immediately after his surgery, at which stage a clearer understanding will be established on his recovery timescale. However, it is likely that Kieran will now miss the remainder of this season.

“Everyone at the club will now be supporting and working hard with Kieran to get him back on the pitch as soon as possible.”

Gunners defender Nuno Tavares deputised for Tierney in the London derby, but the Portuguese defender was partly at fault for the Eagles’ first two goals and was substituted by Arteta at half-time.

Arsenal also have Cedric Soares and Granit Xhaka as makeshift left-back cover as well, with both players filling in for the injured Tierney last season under Arteta.

The north Londoners also have problems at right-back, with Takehiro Tomiyasu suffering a setback in his recovery from a calf injury.

Arteta revealed last week that he believed Tomiyasu was in contention for a start at Crystal Palace on Monday, but the Gunners confirmed that the Japanese right-back will not return until after their match at Southampton on April 16.

Gunners midfielder Thomas Partey also limped off on Monday night in the build-up to Palace’s third goal, with Arsenal announcing that the Ghanaian is still being assessed after that blow.

Defeat for the Gunners at Palace on Monday night leaves them fifth in the Premier League table, level on points with arch-rivals Tottenham in fourth – but Arteta’s side have a game in hand.

Arsenal face Brighton this Saturday ahead of a trip to Southampton next weekend, before facing a trio of big clashes against Chelsea, Manchester United and West Ham which could go a long way to determining whether they finish in the top four places.

“Kieran Tierney is going to be a big miss for Arsenal. He’s one of the players you can’t afford to take out of this Arsenal team. He’s solid, he’s an 8/10 every week, he sets an example.

“He’s a winner – you know what you’re going to get with him, and he was a big miss on Monday night.

“Nuno Tavares had one of them games at left-back, but it’s hard when you’re out of the team for so long. You’re not really playing football – you’re just training. Even playing in the U23s, it’s not the Premier League.

“To come in and say: ‘Right, play in this game’ – you feel for these players. No matter how much you train, it’s not the same as playing.”