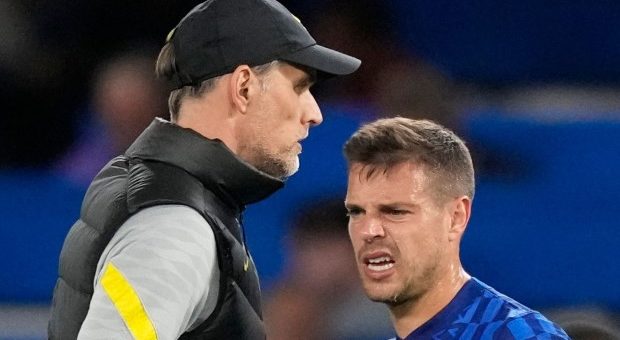 Chelsea boss Thomas Tuchel admits he is a “little bit” annoyed with Barcelona over their pursuit of Cesar Azpilicueta.

The 32-year-old has 12 months remaining on his Chelsea contract and has reportedly asked to leave the club after a decade at Stamford Bridge to return to his native Spain with Barcelona.

But Tuchel says he is not sure if he wants to give Azpilicueta “what he wants”, and believes Barca have undervalued the defender, comparing his value to that of recent Chelsea capture Kalidou Koulibaly, who signed for £33m from Napoli earlier this month.

When asked at the Universal Orlando Resort, if he has been annoyed by the Spanish giants’ pursuit of Azpilicueta, Tuchel replied: “Maybe a little bit.”

Asked about the Spaniard’s future, Tuchel said: “It’s a tough question because I am not sure if I want to give Azpi what he wants.

“At some point it is about what we want. I just made the comparison about how much we fought for Koulibaly, who is a national team player and roughly the same age.

“He is a hugely important player for Napoli but we have a Spanish international who is the captain at Chelsea. I see him maybe at the same level but Barcelona don’t see him on that level. So I am not sure if I want to give him what he wants as he is a huge player.

“We don’t think so much about other clubs. The focus is on us and what we need. I said that to him and I say it to you that I understand on a personal and a career level. But I am not only in this role to give him what he wants. I am a manager for Chelsea who wants to do what’s best for Chelsea.

“He doesn’t like it but he understands. It is tough for him because the other club is permanently on him. On September 1 when things calm down, then he can play on his highest level.”

Tuchel also told Sky Sports News: “I understand his wish, his concerns, his thoughts about his career and his personal life, but he is also our captain, a huge captain and a legend and a winner. And I don’t see many reasons as my role as manager to give up on all these strengths that he has.”

Sky in Germany: Werner wants to leave Chelsea
Timo Werner could depart Stamford Bridge this summer with the striker wanting to leave the club, according to Sky in Germany.

Asked whether Werner is looking for an exit, Tuchel told Sky Sports News: “I don’t think so, so I don’t know about it.

“Timo has not talked to me about it. I think he wants to make his way at Chelsea, and he is still to prove a point.”

Werner joined Chelsea in June 2020 from RB Leipzig in a £45m deal and has scored 23 goals in 89 appearances in all competitions.

The 23-year-old belatedly joined up with Sevilla’s pre-season training camp in Portugal on Thursday after he was initially left out of the group.

Chelsea have had a verbal agreement with Kounde since June, with the former Bordeaux defender admired for some time by Tuchel.

Asked about their Kounde pursuit, Tuchel told Sky Sports News: “No news. If there will be news about Jules Kounde I will tell you. I will not start commenting on other players.”

But the German admitted he wants a “minimum of one more” defender, having lost Antonio Rudiger and Andreas Christensen to Real Madrid and Barcelona respectively this summer.