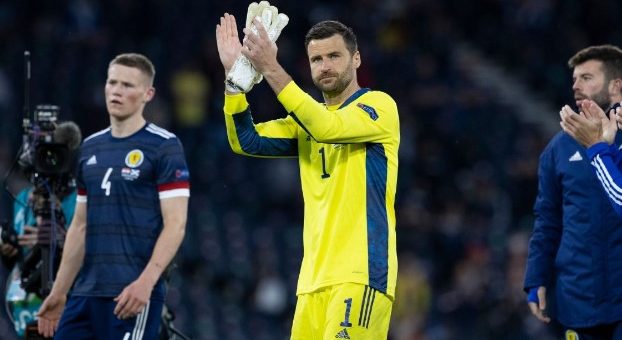 Scotland goalkeeper David Marshall has announced his retirement from international football at the age of 37 as he wants to allow the next generation of goalkeepers to gain vital international experience.

Marshall was the hero as Steve Clarke guided the nation to Euro 2020, making crucial saves in penalty shootouts against Israel and Serbia.

But he has not featured for his country since last summer after falling out of the reckoning at crisis club Derby.

He was though recalled to the squad for the World Cup play-off semi final against Ukraine and the upcoming Nations League matches, but was an unused substitute as Craig Gordon continued in goal.

Marshall, who has signed a two-year deal with Hibs, made his full Scotland debut in a friendly against Hungary in 2004 after his standout performance for Celtic against Barcelona in the UEFA Cup.

He was first choice during qualifying for Euro 2016, but was dropped after a 3-0 defeat to Slovakia.

Current Scotland boss Steve Clarke recalled him in June 2019, when he played in the Euro 2020 qualifiers against Cyprus and Belgium.

Marshall saved a penalty against Israel to see Scotland progress to the qualifying play-offs then saved the decisive penalty in another shootout against Serbia.

That stop saw Scotland qualify for their first major tournament in 22 years.

Marshall told the SFA website: “I have thought long and hard about it since the disappointment of losing to Ukraine.

“I love playing for my country and the experience of helping the team to a major tournament has been the highlight of my career.

“I have memories of playing for Scotland that will last a lifetime but I also know what it is like as a young goalkeeper to have the opportunity. That was the overriding factor in my decision: Liam and Zander have been involved in recent squads for a while now and it is important that they can benefit from the experience of supporting Craig as No.1.

“The more I thought about it since the weekend, the more I was convinced it was the right thing to do before we start the Nations League campaign.

“My team-mates, the coaching staff and the backroom team all know how much I think of them, and I wish them all the best of luck for the coming games and in the campaigns ahead.”

Craig Gordon, Liam Kelly and Zander Clark will make up the goalkeeping contingent for Scotland’s Nations League matches this month.