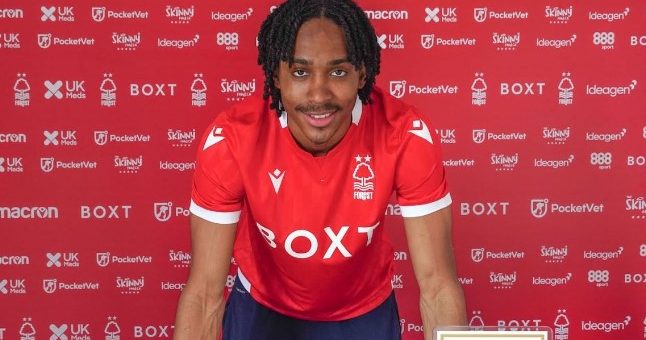 Nottingham Forest wing-back Djed Spence is the Sky Bet Championship Goal of the Month winner for March, receiving 42 per cent of the public vote.

Spence usually sets up others, but this was all his own work – scored against QPR on March 16. One touch 30 yards out to set himself before a strike so sweet,

it bent beguilingly this way and that before bulging the net.

Lead Sky Bet EFL Goal of the Month judge and Sky Sports Pundit Don Goodman said: “Swiftly off the back of winning the Championship’s Player of the Month award, Spence also picks up the Goal of the Month for the stunning strike that put him right into the spotlight in March.

“The Forest juggernaut continues to pick up pace and Spence is a crucial cog in the machine that will now hope to push Bournemouth all the way in the hunt for automatic promotion.”

Plymouth Argyle midfielder Danny Mayor is the Sky Bet League One Goal of the Month winner for March, receiving 49 per cent of the public vote.

The true genius of Mayor’s artistry is in the disguise of his intentions. In one effortless movement he caressed a bouncing ball off the outside of his right foot to arc it into the net.

Mayor said: “It was alright, wasn’t it? I had no idea it was going in to be honest, I was as shocked as everyone else when it did.

“I remember Ryan (Hardie) laying it off and I just spotted the keeper off the line and went for the volley.

“I’m just really pleased it helped the team get the three points on the day.”

Lead Sky Bet EFL Goal of the Month judge and Sky Sports Pundit Don Goodman said: “When things are going well, special things can happen, and Plymouth’s fine run during March was capped by Danny Mayor’s magnificently controlled, volleyed lob finish which made it six wins from six in the league.

“Mayor has shone this season and played a pivotal role for Steven Schumacher’s promotion-chasing Pilgrims.”

Bristol Rovers’ midfielder Elliot Anderson is the Sky Bet League Two Goal of the Month winner for March, receiving 50 per cent of the public vote.

There was something Maradona-esque about the way Anderson slalomed his way through the Harrogate defence, showing the ball, then dragging it away before finding the bottom corner.

Anderson said: “I’m very happy to win this award as I enjoyed scoring that goal. Hopefully it won’t be the last award we pick up this season!”

Lead Sky Bet EFL Goal of the Month judge and Sky Sports Pundit Don Goodman said: “Although it may have been clear to those who have followed his career closely, this mazy run and smart finish was the moment where Elliot Anderson announced himself as a huge prospect to the wider EFL world.

“Under Joey Barton’s tutelage, the Newcastle loanee has steadily grown throughout the season and is now leading Rovers’ charge towards the League Two promotion places with another tidy goal this weekend.”