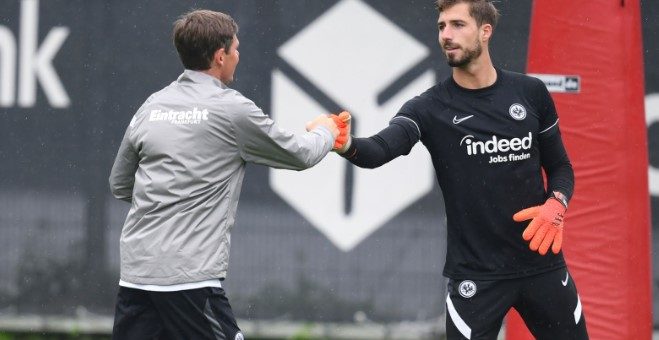 The Barcelona players realised it as soon as they ran out to warm-up, whistled onto their own pitch by an Eintracht Frankfurt contingent that would swell to 30,000 inside the Nou Camp by kick-off. “I very much believe it affected the result,” says Axel Hellmann.

Hellmann is the fan-turned-CEO at Frankfurt.

He could be seen smiling pitch-side, revelling in the moment afterwards, and who could blame him. Barcelona vanquished in their own stadium, a second Europa League semi-final in three years for his club.

“To win is usually impossible for a team like Eintracht Frankfurt,” says sporting director Markus Krosche. “It was a big day for Frankfurt, a big day for German football. To win as a German team in Barcelona is not normal. These are memories you never forget.”

The face of 22-year-old winger Jens Petter Hauge lights up as he revisits it all. “I will remember that night for my whole life,” he says. “The atmosphere in the locker room, the feeling in Camp Nou afterwards when we were celebrating with our fans, it was amazing.”

For the club’s goalkeeper Kevin Trapp, the experience has been called cathartic given he was the man between the posts for Paris Saint-Germain’s infamous 6-1 defeat to Barcelona in 2017. “It was a special situation for me,” he acknowledges.

Frankfurt went three up before a late comeback had nerves jangling. “Barcelona were clear favourites,” adds Trapp. “But we all believed.” It took more than that. “It is one thing to believe and another thing to go there and actually do it,” continues Hauge.

What makes the Eintracht Frankfurt story so remarkable is that this should not really be happening. Star striker Andre Silva was sold last summer. They are ninth in the Bundesliga, that night in Barcelona their only win in eight games. Europe has been their salvation.

“Normally, in the Bundesliga, especially at home, we have a lot of opponents who defend really deep so we have to find solutions in the last third of the pitch,” Krosche explains. “There are enclosed spaces and it is not so easy, the opponents play in transition.”

Against Barcelona, and even before that against Real Betis, the situation was different. “There were more open spaces. The opponents are more offensive so we can play on transition and that is much easier in football than finding solutions in the last third.”

The counter-attacking game of coach Oliver Glasner seems ideally suited to besting the best. In October, they inflicted the first of only two home defeats for Bayern Munich this season. “He has a clear plan and is top at analysing the opponent,” adds Krosche.

Hauge agrees. “We have shown we can beat anyone. We won in Munich, we won in Barcelona. His system works well against tough teams.” Trapp respects that. “He always has a plan. It is good to have a coach who knows what he is doing. He transmits confidence.”

This is the more prosaic reason for Frankfurt’s success in Europe, but there are those at the club who believe there is a more romantic explanation. After all, Eintracht Frankfurt played their part in perhaps the most famous European Cup final of them all in 1960.

It is remembered as the apotheosis of Real Madrid, 7-3 winners thanks to three goals from Alfredo Di Stefano and four from Ferenc Puskas. But Frankfurt’s role in that famous game is just part of the reason why European nights are woven into the fabric of the city.

“It begins with the history of the club,” says Hellmann. “Eintracht Frankfurt, going back to the 1950s, is an international club. It is an open-minded city, a financial hub, so a lot of people from abroad feel welcome and at home in Frankfurt. This is deeply in our DNA.

“In 1951, we were the first club after World War Two playing in the United States. Germans were not welcome at that time but we were building bridges around the world. It is so inherent in our club structure. International competition is warmly accepted by the fans.

“So many things come together to make the unique DNA of the club. Eintracht Frankfurt is not only a football club. We have 52 teams across different sports, with over 100 nations represented. We have over 100,000 members. There are no borders here.”

Trapp notes that when Frankfurt play in Europe “it is something special here”, with Krosche pointing out “the supporters love the competition and live the competition”. Taking 30,000 to Barcelona was remarkable but in-keeping with that tradition.

Fifteen-thousand fans once went to Bordeaux to watch their team. Similar numbers have trekked to Milan and Rome in the past. This is part of Frankfurt’s fan culture. “The fans are travelling everywhere, making the impossible possible,” says Trapp.

As they prepare to face West Ham in the semi-final, there are obvious similarities between these mid-tier clubs with huge support and aspirations for more. The West Ham owners are childhood fans. Hellmann has been a Frankfurt member since he was three.

The difference is Frankfurt’s fans retain control of their club through the 50 plus one rule that is popular at many Bundesliga clubs. While their Premier League counterparts dream of takeovers by billionaires, Frankfurt – the Eagles – want to soar another way.

“We believe that football is more than sport and more than business, it is a living community,” says Hellmann. “That is one of the reasons why 50 plus one is a good rule because it gives the fans the opportunity to run their own club with their decisions.

“The more emotional part is that they are participating in football, the price policy, the seating. I believe this is a healthy and balanced concept in football. You can bring together money and passion. That is what the club culture of Eintracht Frankfurt is about.

“Six years ago when we again avoided relegation, we made the decision to invest in infrastructure after 15 years of non-investment. We took over the stadium which was in the city’s hands so new revenue streams came up. We invested in the youth department.

“The club is on another level right now.”

Trapp echoes that sentiment having seen it for himself since returning from PSG for his second spell at the club.

“When I left Frankfurt, it was a club fighting not to be relegated. The facilities here are much better now than before, the infrastructure, everything. Also, the objectives changed. You aim higher now for different goals. This club grew.”

There are limitations, of course. Silva’s sale was not the first or the last.

“It is not so easy,” Krosche explains. “On the one hand, when you are successful everybody is happy. This is what you work for. But when you achieve something great as we have in the Europa League it is natural that our players will attract interest from other teams.

“At a club like Eintracht Frankfurt you have to decide whether a player has to leave or you can convince him to stay. It is not easy because the impact of coronavirus was massive to our revenues. It was a big challenge to handle this situation.

But in the meantime there is the potential for glory.

“It is all about us now,” says Hauge. “We need to create our own story and make sure the next generation of Frankfurt fans will remember our names.”

The Norwegian arrived from AC Milan but he has experienced nothing like this before. “Here, it is something else,” he adds. “The fans are amazing, even when we struggle in the games, I still have 55,000 people supporting me.”

West Ham will not allow that many into the London Stadium on Thursday evening, but that will not be the end of the adventure with the home leg to come back in Frankfurt. Prevail there and it is on to Sevilla and a first European final in 42 years.

“If we achieve this, I can promise you that a lot of people will join us in Seville,” adds Krosche.

“I don’t know how many people will stay in Frankfurt.”