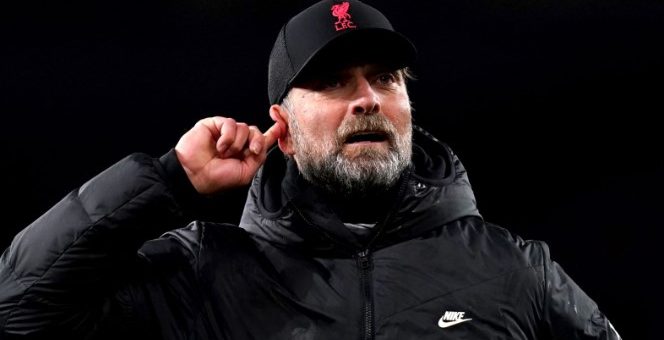 Jurgen Klopp says playing the FA Cup semi-final between Liverpool and Manchester City at Wembley – despite there being no direct trains to London – is “one of the most ridiculous stories I ever heard”.

The Reds face City at Wembley on April 16 despite engineering works meaning no trains are running on the West Coast Mainline for the whole Easter weekend.

The FA is putting on free coaches for up to 5,000 Liverpool and City fans but getting to London will undoubtedly be a challenge for supporters with tickets.

Liverpool captain Jordan Henderson criticised the decision, saying: “I’ve been thinking a bit more about the fans,” he said. “In many ways, it’s their day, and not being able to get down to London for different reasons – the cost of that.

“In my head, it would make sense obviously to change it to a (different) neutral venue, especially with it being two teams from the north-west”.

The mayors of Manchester and Liverpool also signed a joint letter to the FA asking for the game to be moved.

Liverpool boss Klopp went further than Henderson during his press conference on Friday, saying: “It’s one of the most ridiculous stories I ever heard.

“I heard that they know it since 18 months. I’m not sure what the FA thought. No club from the north west will be part of the semi-finals? I really can’t believe that things like this can happen with all the information you have out there.

“I heard the FA – probably we’ll do it as well – put on some coaches on the road, but what is it, usually four and a half hours to London, it will be then 12 probably because all the coaches are in the same direction. It makes absolutely no sense.

“I’m not sure when they had to decide when is the semi-finals. I think there would have been probably another weekend between the Champions League games. At least then all the fans could have gone to Wembley and now they can’t, or it’s more difficult.

“On the other hand, how I know our people, they will find a way. I’m just really not happy that somebody made it complicated for them. It should be easier to go and see your football team in a semi-final.”

What’s next for Liverpool?
Klopp’s Liverpool won the Carabao Cup in February and are still in the hunt for three more trophies in their quest for a historic quadruple.

After facing Watford at home on Saturday lunchtime, they travel to Portugal for their Champions League quarter-final first-leg with Benfica on Tuesday night.

They come back from the Iberian Peninsula to a massive Premier League encounter away at Manchester City on April 10, live on Sky Sports. Should both title rivals keep up the pace before that Etihad Stadium clash, then Liverpool could go two points clear at the top with seven games with a victory in that clash.

The return leg of their Champions League clash follows that title clash, before they face Pep Guardiola’s side again in the FA Cup semi-final at Wembley.

Then Klopp’s side will need to get into the derby spirit as they host Manchester United and Everton in the space of five days between April 19 and 24, with both games live on Sky Sports.
bet365 sport. To add to the In-Play excitement, bet365 stream over hundreds of events live to your PC every year. So you can bet as the action unfolds. See all upcoming sport events you can bet at bet experts. Highlights include Masters Series Tennis tournaments and matches from some of the top domestic Soccer leagues in the world. To use the Live Streaming service you need to be log in and have a funded account. Or to have place a bet in the last 24 hours. Any fixture/event on bet365 website and bet365 mobile which has the Play or Video icon is schedule to be show via Live Streaming. bet bg