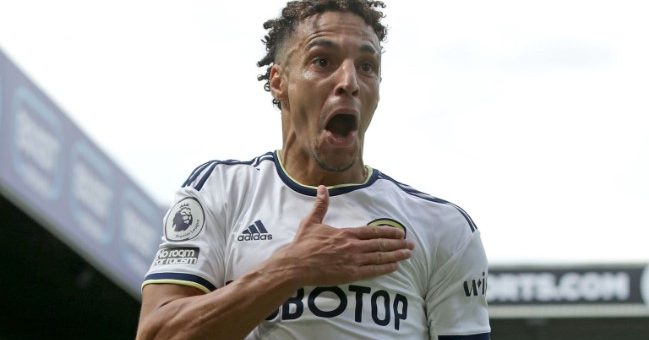 Jesse Marsch’s new-look Leeds got off to the perfect start as they came from behind to beat Wolves 2-1 at Elland Road.

Wolves dominated the second half, but were pegged back when Rayan Ait-Nouri turned Patrick Bamford’s cross into his own net (74) to give Leeds the three points.

The visitors had initially taken the lead through Daniel Podence’s half-volleyed effort (6) and rode their luck when goalkeeper Jose Sa took out Rasmus Kristensen in the penalty area unpenalised.

Rodrigo Moreno was on hand to equalise (24), before the own goal – which was initially awarded to debutant Brenden Aaronson – completed the turnaround.

“I’m taking credit for it,” said Aaronson. “It came off my shin somewhere in there”.

Wolves were effective with the few chances they created in the first half and took the lead through Podence’s effort – after a Hwang Hee-Chan nod down – bounced into the ground and cruelly over the head of Leeds goalkeeper Illan Meslier.

There was a contentious moment less than 10 minutes later as Sa collided with Kristensen in the area after recklessly coming off his line to claim a cross. Neither the referee nor the VAR deemed it a foul to the amazement of Clinton Morrison, who told Soccer Saturday: “I have no faith in VAR”.
Marsch’s side responded well and put Wolves under intense pressure and it paid off as Aaronson, who was a live wire throughout, won the ball back inside the Wolves box to create the opportunity for Rodrigo to fire the ball underneath Sa at his near post with his weaker right-foot.

Wolves increased their width in the second half and looked like a new side, creating dangerous moments through Podence and Pedro Neto on numerous occasions, with Leeds right-back Kristensen producing a last-ditch challenge to deny a goalscoring opportunity for the visitors.

For all the Wolves pressure, it was Leeds that got the all-important goal as Patrick Bamford delivered an early low cross for Aaronson at the back post. The USA international, who arrived from RB Salzburg, wheeled away as if he had swept home, but it was subsequently awarded as an Ait-Nouri own goal.

The absence of Raul Jimenez – or a suitable back-up – cost Wolves as they lacked a focal point when applying the pressure in the second half, and the frustration spilled over for head coach Bruno Lage as he tussled with Marsch at the final whistle. His wait for a deputy to Jimenez goes on with less than a month of the transfer window to go.

What’s next?
Leeds have a favourable opening run of fixtures, facing only two of the ‘big six’ – Chelsea and Manchester United – in their first 10 matches. They travel to Southampton on Saturday August 13; kick-off 3pm.

On the same day and time, Wolves host newly-promoted Fulham at Molineux.