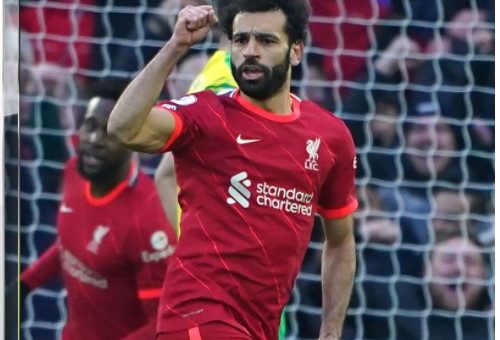 Mohamed Salah scored his 150th Liverpool goal with Sadio Mane and Luis Diaz also on target as the Reds came from behind to beat Norwich and cut the gap on Manchester City to six points – with Liverpool holding a game in hand.

Salah struck with a composed finish moments later after a brilliant 70-yard ball from goalkeeper Alisson, with new signing Diaz rounding off the scoring after tucking away Jordan Henderson’s slide-rule pass.

“Norwich have a very different style but played a proper game, defended deep, had their counter-attacks, made it really tricky for us,” Liverpool manager Jurgen Klopp said after the win.

“We had moments and then the game can look completely different, then a deflected ball can be pretty decisive, but these boys just don’t give up.”

Norwich boss Dean Smith was not happy with the goals they conceded but admitted they did not warrant any more than they got.

“I have to be honest and a realist and ultimately we got what we deserved – nil points,” he said.

“We asked some serious questions of a good team and it took a front three of Salah, Mane and Diaz to ultimately take the points away from us. Certainly there are some things we could have done better.”

Liverpool have now claimed victory in five straight games in the Premier League and have won their last eight matches in all competitions.

Klopp’s decision to make seven changes, including defender Joe Gomez’s first league start in 15 months at right-back, from the midweek Champions League win over Inter Milan could have affected the fluency but there was little sign in a first half which resembled attack versus defence at times.

The only thing which was lacking was a finishing touch as Salah, Kostas Tsimikas, Virgil van Dijk and Mane all either missing chances or seeing shots blocked by some last-ditch defending.

Norwich’s main threat had come from trying to break through Liverpool’s high line and although Rashica had the ball in the net early on it was correctly flagged offside, although there was no such reprieve for Teemu Pukki who timed his run right but then rolled a shot wide of the far post with only Alisson to beat.

However, they were handed a chance to produce an upset when Rashica’s 48th-minute shot took a wicked deflection off Joel Matip to send the ball spinning out of Alisson’s reach and into the net.

But just like in the San Siro in midweek, Klopp’s substitutions made an impact.

Thiago Alcantara and Divock Origi arrived on the hour for Oxlade-Chamberlain and Keita as Liverpool went 4-2-4 and the equaliser was not long in coming.

Tsimikas knocked down Jordan Henderson’s cross and Mane’s finish was clinical. Step forward Salah for his landmark goal before Diaz scored in front of the Kop to secure the points.

Salah and Mane both grazed the outside of the post with efforts but the job had been done and the message sent to the Etihad Stadium.

Salah has now scored 25 in 30 appearances this season including 17 in 23 Premier League matches.

On becoming the second-fastest Liverpool player behind Roger Hunt to score 150 goals for the club, Salah said: “It feels great. I’m always proud to score for this club and the most important thing is to win games which is what we did today.

“What we can do is focus on each game and that’s the most important thing.

“We know when you fight with City, City most of the time they win games so all we can do is focus on ourselves and see what happens at the end of the season.”