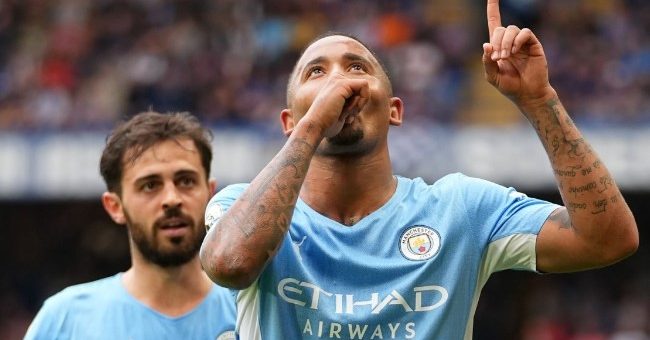 With Manchester City now confirmed as the 2021/22 Premier League champions, we pick out six games that won them the title.

It seems strange to think of it now but Manchester

City went to Stamford Bridge in September under severe early season pressure. They began the day three points behind not just their opponents Chelsea but Liverpool and Manchester United too.

Gabriel Jesus’ second-half goal in a 1-0 win hardly reflected their dominance against the team that had beaten them in the Champions League final just four months earlier. City had much more of the ball. Chelsea did not even muster a shot on target.

Victory took them level with Chelsea and when Manchester United lost at home to Aston Villa and then Liverpool failed to beat Brentford later in the day, the picture changed. City were now one point off the top. But they had demonstrated their superiority.

City were still behind their rivals after 10 games when they suffered a shock home defeat to Crystal Palace in October but the response to that result was emphatic. They not only went to Manchester United and won the derby but went on to win the next 11 games too.

Ole Gunnar Solskjaer’s United were tactically outmanoeuvred as Guardiola kept his wingers high up the field, pinning the home team’s wing-backs and allowing Joao Cancelo the freedom of Old Trafford. The difference was two goals. The difference was a chasm.

There was a suspicion that City’s rhythm had been disrupted by the early season international breaks. The final one of the year followed this victory. After that, Guardiola had the undivided attention of his players through the winter. City began to pull clear.

This was far from City’s best performance of the season but it must have been one of the most satisfying, snatching the points from Arsenal thanks to Rodri’s stoppage-time winner. The Gunners had taken the lead but that late goal consigned them to a 2-1 defeat.

Arsenal, with Mikel Arteta absent due to Covid-19, were reduced to 10 men just before the hour as a result of Gabriel’s unnecessary red card and were left to bemoan some VAR calls. But City’s ability to snaffle victory even when not at their best felt significant.

It was their latest winner in over three years and, coming on New Year’s Day, started 2022 in the right way, taking them 12 points clear of Liverpool and 11 ahead of Chelsea. Beating the former in their very next game all but ended Thomas Tuchel’s team’s hopes.

This was a game that City should have won. They twice led, early on through Kevin De Bruyne, and later in the first half thanks to Gabriel Jesus. The Brazilian might have done better with a second-half chance. Riyad Mahrez missed in stoppage-time.

But it is now clear that avoiding the dramatic momentum swing that a Liverpool victory would have exacerbated was the most important aspect of this 2-2 draw. Jurgen Klopp’s side were on a run of 10 consecutive Premier League wins. Many fancied them to do it.

Instead, City outplayed them and had the better openings. They played with confidence and Liverpool were hanging on through a high tempo first half. At the time, it felt like a chance missed. In truth, it ensured City retained their advantage at the top.

On the face of it, this was a routine victory but the circumstances in the build-up to this five-goal win over Newcastle made it one of the most challenging moments of the season. City had been eliminated from the Champions League by Real Madrid earlier in the week.

That defeat was dramatic, of course, as Guardiola’s side conceded twice very late on. Questions were asked of their character. How could they possibly bounce back from such a deflating result? Newcastle boss Eddie Howe wondered whether it may be a factor.

The away team had chances early on, Chris Wood wasting a headed chance. That might have set nerves jangling. Instead, City powered to victory, cheered on by an extremely supportive Etihad Stadium. It gave them the impetus to see the job through.

How can any list of the key games be complete without this one? The first time in 17 years that City have come from two goals down to win a Premier League game. That was under Kevin Keegan against Norwich in February 2005, a season in which they finished eighth.

This was rather different, one of the most remarkable matches that this stadium has ever seen. Unnerved by Matty Cash’s first-half goal, Guardiola’s players looked beaten by Philippe Coutinho’s strike midway through the second. It needed an outrageous turnaround.

Ilkay Gundogan’s introduction inspired it. Rodri scored the equaliser. De Bruyne played the assist for the winner. Everyone celebrated. It was a very Manchester City way to win it. A suitably dramatic culmination to a dramatic Premier League season.