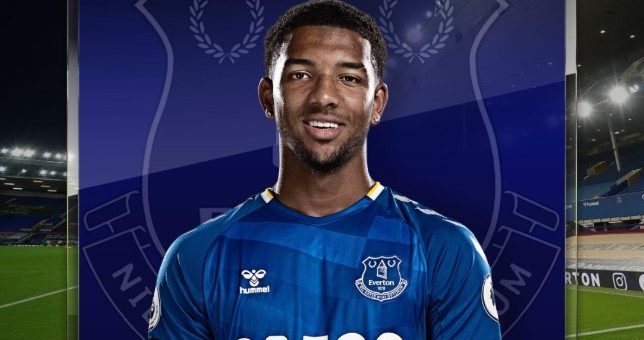 Frank Lampard has got Mason Holgate believing the good times are just around the corner for Everton as they prepare to face West Ham on Sunday, live on Sky Sports.

That may seem odd to some after just one win in their last five Premier League games and Everton only one place above the relegation zone, albeit having games

in hand on their rivals.

But the centre-back has little doubt that Lampard can help steer the club to safety this season and onto new heights in the near future.

“We’re very confident of staying up,” Holgate tells Sky Sports ahead of Sunday’s trip to West Ham. “I think the gaffer now and the team that he’s brought in are unbelievable, I think everyone in the squad thinks that as well.

“I think it’s a difficult circumstance that he’s come into. But I think he’s a great manager, and I think we are all going to benefit from him and as the season comes on everyone is going to see that.

“We’ve all got complete faith, he goes into every detail, and we know exactly what we need to be doing.”

Holgate, in particular, has benefitted from Lampard’s arrival. Both his place in the starting line-up and his self-belief have been restored under the former Derby and Chelsea manager.

Lampard has started Holgate in nine of his 10 games in charge. But it was a completely different story under Rafael Benitez, who in his 23 games on Merseyside handed Holgate the same number of starts.

Holgate, who describes himself as a “ball-playing centre half”, has also been returned to his favoured position under Lampard – often on the right of a back three – after being used as a utility player in recent seasons.

“He’s made quite a big impact on me,” Holgate says of Lampard. “Just giving me the confidence of playing is something that’s massive for me personally.

“I think he and his staff are showing me what I need to be doing and improving. I want to be improving, I want to get better, and I want to help the team as much as I can.

“To be a part of the team and playing every week, shows the confidence he has in me, so I am wanting to repay that.”

Why Everton have ‘nothing to fear’ at West Ham
Holgate is optimistic about the future at Everton under Lampard, but says “that’s not what this season is about”. He is under no illusions about the situation they find themselves in.

“We are in a relegation fight there is no denying that,” he says. “We know where we are now, and we have 11 games to sort it out as a squad.

“If I am looking at other squads that are going to get relegated, I believe that we have the quality to get ourselves out of the trouble that we are in.”

Of those 11 games, six come away from Goodison Park. And it’s been a big problem for Everton getting results on the road this season – their last away win was at Brighton in August. No side in the league has accrued fewer points on the road.

Holgate admits that Everton’s poor away record is “a little bit strange”, but refuses to give the stats too much weight. For the defender, the important thing is “winning games, no matter where they are”.

He also points out that it was only last year that he was facing questions about Everton’s patchy home form under Carlo Ancelotti. They lost 11 games at Goodison in all competitions that season, compared to four on the road.

Irrespective of away form, Sunday’s match at West Ham, live on Sky Sports, is a huge test for Lampard’s side.

David Moyes, a former Everton manager, has led West Ham to the last eight of the Europa League, and kept them in touching distance of the top six with just eight games left of their league campaign.

Both teams are fighting for very different goals, but Holgate is adamant that the gap between the sides is not as big as the table appears to show.

“But look at our team and I think if we are all flying, there is nothing to fear. Ultimately, we’ve not been doing that enough.”

Holgate on his ‘difficult’ few years
As Holgate points out, Everton’s squad has underperformed this season. And the defender admits the 18 months prior to Lampard’s arrival had been a struggle for him, too.

Holgate was reportedly in line for his first England call-up that season before Covid struck, with Euro 2020 subsequently postponed by a year.

“It’s been difficult, at first there were injuries,” he says. “Then by the time I came back there were a lot of other injuries in the squad, so I was playing in a lot of different positions.

“I don’t think two games went by when I was playing in the same position.

“It’s a positive in the aspect that the managers believe I can play in those positions. But I’m not going to be able to play as well in other positions as I am in my position, playing week in week out.

“And then Benitez came in, and I didn’t play at the start of this season, and there was nothing I could do about that. I just had to work hard and keep training.”

Now he has nailed down a regular spot under Lampard, Holgate is positive about his form, but feels being a defender in a struggling team makes him somewhat of an easy target for criticism.

“I think from my own personal standpoint as a defender it is hard when the team is not doing well because it is always your fault,” he says. “No matter what, when you go through the goals, there is always somewhere down the line where it is your fault.

“So people will be like, ‘Oh, he’s not playing well,’ whereas a couple of years ago we were doing well when I was in the team, and we were winning games. All of a sudden, it looks completely different.

“But from my point of view, I’m feeling good and playing games. I think once the team goes in the direction everyone is confident it will go, people will turn around and be like, ‘Oh his form is back now’. But I don’t think it is down to that, it’s just that at the moment we are all going through difficult times.”

Everton the focus – but England not ruled out
“Let’s be honest, if a team is struggling, the chances of getting called up for England are slim anyway,” says Holgate, when asked if representing his country is still on his mind.

The 25-year-old is fully aware of the situation he finds himself in less than two years after being considered by England manager Gareth Southgate in what was his best season at Everton.

But his mind is elsewhere now. “Since I’ve come back in the team, we are all fighting for something,” he says. “Everton needs to be the focus of everybody in the squad.

“I don’t think the time is right now to think about England, I think next season or maybe the season after, when the club gets going, that’s when I can start thinking about those things a bit more.

“We’re all fighting for a massive goal and once that comes next season hopefully we will get going and the manager will have a full season with us all. And then I have complete faith in my ability that that will come.”