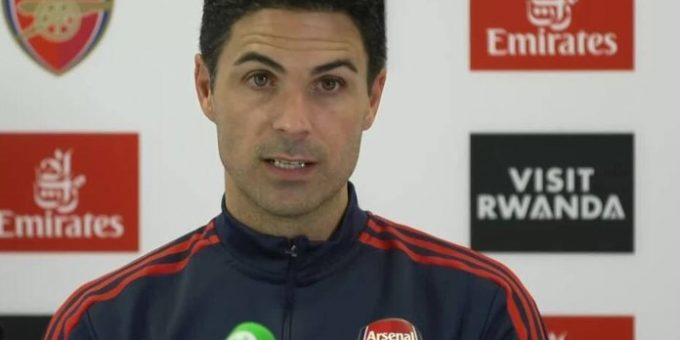 Mikel Arteta insists Arsenal did everything in their power to make signings on Deadline Day, but stayed disciplined to avoid making costly panic signings.

The Gunners moved swiftly in the summer transfer

window to bring Gabriel Jesus, Oleksandr Zinchenko, Fabio Vieira, Marquinhos and Matt Turner to the Emirates before the start of the 2022/23 Premier League season, but injuries forced them back into the market as the deadline loomed.

After seeing a third and final bid of £25m rejected by Aston Villa for midfielder Douglas Luiz, Arsenal concluded their summer business at five signings, with Arteta refusing to bring an unsuitable player to the club for the sake of it.

Speaking ahead of Arsenal’s Super Sunday trip to Manchester United – live on Sky Sports – Arteta said of their fruitless attempts on Deadline Day: “Yesterday we could have done something if it was the right player, the right deal, and something we could afford.

“Sometimes you have to react to something that happens, we would have done that, it was a real possibility yesterday. We tried but then we kept the discipline to say it had to be the right player for the team and the club.”

He continued: “We have done a lot of things and still have a lot to do in this squad, you see the amount of departures compared to the players we have recruited. The club has done a phenomenal job and put everything on the table to bring the profile of players we want.

“We did our business early, but unfortunately in the last 72 hours Thomas [Partey] got injured in the same place as last time and then Mo [Mohamed Elneny] has a long-term injury and we had to react in the market.

“We tried but at the end of the day we have to pick the right player we believe is right for the team and the club. We have learned a lot from that [signing the wrong player]. There are still players we have to get out.

“We only have to bring top quality talent, people through the door and have to be very disciplined because in those moments you can make huge mistakes that cost the club and the team a lot. We want to avoid that as much as possible.

“We pushed to strengthen the team and bring the best possible players to the football club. We managed that to a certain level. We had our limitations with time, we tried to act, but didn’t find the right player.”

‘I love him’ – Arteta on Barca-bound Bellerin
While Arsenal were unable to bring anyone through the door on Deadline Day, the conclusion of Hector Bellerin’s 10-year association with the Gunners was confirmed as his contract was terminated to allow the right-back to seal a free transfer to Barcelona.

Arteta shed light on an emotional conversation with the 27-year-old, adding: “He called me really late last night. It was a conversation like we used to have when we were team-mates and really good friends.

“Take the coach and the player situation out of it. I love the kid, I love what he has done for the club, he’s someone I really have strong feelings about.

“I know it’s one of his dreams to play there [at Barcelona] and hopefully he can fulfil his dream and get back his career where he can because he’s still young and he has a lot to do.”

Odegaard, Ramsdale doubts ahead of Old Trafford trip
Arsenal travel to Manchester United looking to extend their 100 per cent winning start to the season to six games but face a home side rejuvenated under Erik ten Hag having won three consecutive Premier League matches.

Arteta, who ended Arsenal’s 14-year wait for a league win at Old Trafford in November 2020, says United’s revival comes as no surprise given the club’s resources but is confident the Gunners can maintain their winning start.

“It is not something new, we have done it, we have to do it again,” the Spaniard said. “We have to believe that we are capable of going there, playing our way, and winning the match.

“When you look at the squad they have, the players they have signed, the amount of money they have to spend in the market, it’s no surprise they are going to win a lot of football matches.

“Manchester United’s history tells you this is going to happen. It’s another big rival and we need to compete with them.”

Arsenal will definitely be without full-back Oleksandr Zinchenko, Thomas Partey and Mohamed Elneny for the trip to Old Trafford and are sweating on the fitness of goalkeeper Aaron Ramsdale and captain Martin Odegaard, Arteta revealed.

“Ramsdale and Odegaard have been assessed, we will see more tomorrow, hopefully they will be available to be with the team,” he added. “Unfortunately with Alex [Zinchenko] it’s still not the case, he’s missed two games and hasn’t been able to train with the team yet.”