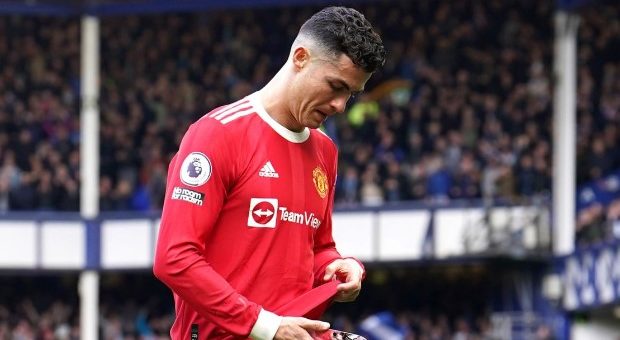 Manchester United interim boss Ralf Rangnick concedes his side’s chances of returning to the Champions League next season are “difficult” following a damaging 1-0 defeat at Everton.

Anthony Gordon boosted Everton’s chances of Premier League survival as his first-half strike proved the difference in a scrappy affair against United.

Gordon’s deflected effort before the half-hour alleviated the pressure on Frank Lampard after a 3-2 midweek defeat at relegation rivals Burnley had left Everton just a solitary point above the drop zone.

This was far from a vintage display from either side but a 1-0 win for the Toffees puts daylight between themselves and the bottom three as United’s top-four ambitions suffered another untimely dent.

Rangnick’s men sit seventh in the table, three points off fourth-placed Tottenham having played one game more, while Arsenal are in fifth placed with two games in hand over United.

“If you don’t score a single goal in 95 minutes we have to be disappointed. We had a good start and should have created more chances out of that domination. Then we concede a deflected shot and lost a bit of our composure.

“The second half we were trying to add creativity with substitutions but we didn’t always take the right decision.

“We had to do something. We needed a goal and we decided to bring Mata and more verticality with Elanga. They were defending with their players in the last 35 minutes. We didn’t find the right player at the right moment. We didn’t have enough players in the box when we played crosses.”

“It’s not only creativity. I think we had enough creative players on the pitch. It’s also about being physical enough in the final third, being physical and trying to score a goal. We didn’t have enough players in the box.”

On United’s top-four hopes, he added: “It’s difficult. As long as we don’t win our own games it doesn’t make sense to hope for good results from the other teams.

“Fred had some muscular problems on his hip flexor. We already are without McTominay. Without both defensive midfielders it isn’t good for us.”

Rangnick made half a dozen changes from the side that drew 1-1 against Leicester last week – Lampard himself made four – as Cristiano Ronaldo and Marcus Rashford were restored to the starting XI.

The bustling Rashford was thwarted twice early on by Jordan Pickford but Ronaldo was largely subdued as United remain cut adrift from the Champions League places after being downed by Gordon’s shot, which thudded into visiting captain Harry Maguire and left goalkeeper David De Gea stranded.

Everton, up until that point, were lacking in inspiration but they noticeably grew in stature after going ahead, when the mood around Goodison Park dramatically changed, although they were given relatively few scares by a United side that have won just one of their last five top-flight fixtures.

Despite coming off in the 64th minute, Marcus Rashford attempted more shots at goal (3) and had more touches in the opposition’s box (6) than any other player in the match. It is scant consolation for the disgruntled travelling fans but it is something that Rangnick can take with him back to Manchester.

The United interim boss continued: “We had a good start to the game in the first 25 minutes, we were in full control. Saying that, we didn’t create enough advantage from this period, especially on the left side. We had our moments and could’ve scored despite me wishing for us to be more penetrating.

“You could literally feel they were crumbling after the defeat against Burnley but we couldn’t take advantage. In the second half, they defended with all their players on the pitch and weren’t able to break that wall down.”

“There’s no point looking at the table when you perform like that. It’s difficult to say why as our training sessions were aggressive and the signs were there. We didn’t pin them back and this is also one of our problems right now as we don’t win the balls to then create the chances.

“I don’t see any connection [when asked if Erik ten Hag talk is a distraction]. I don’t see any connection between this issue or this excuse. A new manager is coming soon. It doesn’t matter if it is announced in five days, 15 days or 20 days. All the players want to play at the highest level, in the Champions League, but if we play as we did today then we don’t deserve it.

“The players shouldn’t struggle with the expectation at this club. You have to score the first goal in a game like this. We have to help the team to find better solutions. We had four strikers on the pitch for the first 60 minutes and played like we did. We need to be more penetrative but in total we just didn’t have enough players in the box.”

A catalyst for change at Everton?

Given both teams are low on confidence, it was perhaps little surprise that it was a cagey opening few minutes, complete with stray passes and the sides loose in possession, although Everton were particularly hesitant, with United getting on top and having two early sights at goal through Rashford.

The hitherto out-of-form forward was lively on the left and had a snap shot parried away by the outstretched Pickford, who moments later excellently got down low to deny a header from the England forward as Gordon snuffed out any danger on the rebound.

Everton appeared listless and lethargic, with their fans growing restless, but the atmosphere and momentum changed as they took a 27th-minute lead following some sluggishness at the back from United.

“I’ve got to give the lads a lot of credit here having lost twice in a week,” Lampard said. “To go again Saturday morning against a team that’s fresh and full of quality was excellent. It was joined-up with the fans, it’s been good here since I’ve arrived by that’s not a given. The players put the effort in. We’ve been due one of those, a deflection, something to hang onto.

“I’m pleased for Anthony. He feels it, he’s grown up here and he’s mature beyond his age. No wonder the fans love him. It’s always a team effort and Jordan made two big saves in the first half and an outstanding one at the end. It felt outstanding. His quality makes the save. Jordan is England’s No 1 for a reason and he absolutely showed it today.”

Lampard pumped his fist on the touchline, and no doubt breathed a sigh of relief, following a momentous win – just the third in his tenure in the league in 10 attempts.

“We know it’s in our hands, regardless of the others, to stay in the league. Some people around me have been calculating how many more points or wins we need but I’m not focused on that. We just need to keep performing like this.”