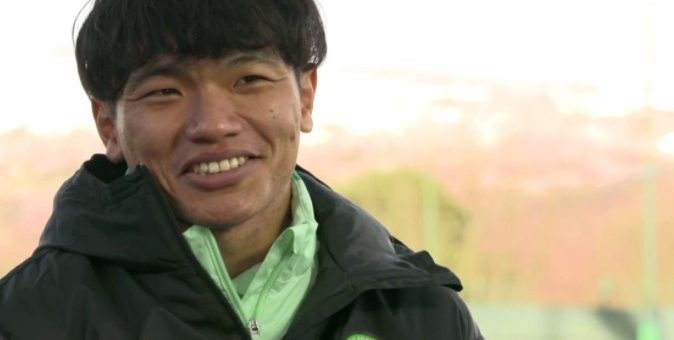 Reo Hatate agrees with Celtic manager Ange Postecoglu’s assessment that there is much more to come from him following his Old Firm heroics in midweek.

Hatate dazzled on his Old Firm debut, scoring twice and assisting Liel Abada for Celtic’s third as the Hoops blew Rangers away 3-0, leapfrogging their rivals

to go top of the Scottish Premiership.

Postecoglu insisted Hatate will get better once he gets sharper and the Japan international agrees.
“If the manager says so, then I’m sure I can achieve more too,” Hatate told Sky Sports News.

“Either way, I will always aim to play and give my all in every game that I play.”

Reflecting on the experience of playing in his first Old Firm game, Hatate said: “I don’t think you need to necessarily compare this feeling to anything else, but being able to experience something entirely new will no doubt help further progress my football career, it was a wonderful experience.

“Of course, I’m very happy [that I scored twice and got an assist] but I’m more pleased that I managed to live up to the expectations of both the manager and the team. It made me feel that I was already part of the team.

Hatate opened his Celtic account with the opener in the 2-1 win against Hearts at Tynecastle at the end of last month, and the midfielder admitted the start to his Celtic career has gone far better than he could have imagined.

“No doubt, it has been a better start than I expected,” he said.

“However, none of this would have been possible without the support from the manager, staff and team-mates.

“So, I would like to express my gratitude to everyone involved with this football club.”

Celtic are now in pole position to reclaim the title after their resounding Old Firm victory over the champions, according to Andy Walker.

Having seen their nine-year title-winning streak ended by Rangers last season, Walker believes Celtic now have the manager, the squad, and experience to reclaim the Scottish Premiership crown.

“I know there are a couple of games against Rangers to play, but to go top of the league now, and in that manner, says a lot about this Celtic side,” he told Sky Sports.

“A lot of the players have been in this position before, they have been winners, it was just such a poor season last time.

“You have got to look at the options Ange Postecoglou still has to bring in. He’s got Kyogo Furuhashi, David Turnbull, Tom Rogic, Christopher Jullien – Celtic have got a really strong squad and that is what gives every Celtic supporter hope that Postecoglou can get that title back.

“The biggest message was that this wasn’t a close game – Celtic battered Rangers. That is what gives every player a lift, and the supporters. Celtic are only in front by a point but, with 14 games left to play, Celtic are in pole position.

“Celtic play at Fir Park against Motherwell on Sunday a few hours before Rangers host Hearts. It’s important Celtic build on it and put pressure on Rangers.”