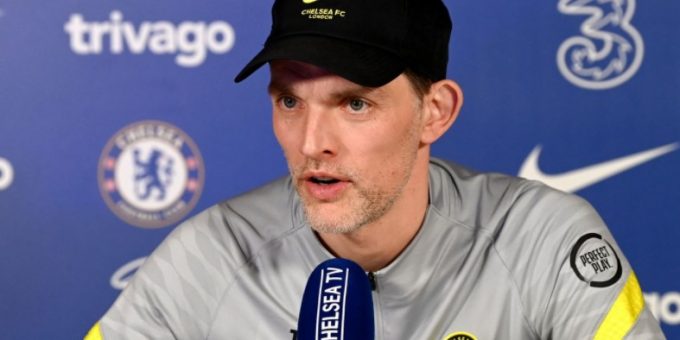 Chelsea owner Abramovich was sanctioned by the government last Thursday after Downing Street claimed to have proven the 55-year-old’s links to Vladimir Putin.

The Russian-Israeli billionaire put Chelsea up for sale on March 2 amid Russia’s continued invasion of Ukraine, and some Blues fans have continued to chant his name at games ever since.

Chelsea are still able to operate under a special government licence despite Abramovich’s other UK assets being frozen, with Blues bosses lobbying Downing Street on relaxations to allow the Champions League holders to operate in close to normal fashion, including selling tickets and merchandise.

When questioned on Johnson’s call on Chelsea fans, Tuchel replied: “I just heard about it some minutes ago. I don’t know if, in these times, if it is the most important discussion to have in Parliament.

“I don’t know if fan chants being discussed in Parliament means that we have to worry about the priorities of this government.

“But OK. Listen, no need to comment from me. We have really far more urgent things to discuss and handle.

“There are restrictions and we have to deal with it. There are adjustments in the amount of staff, who is travelling, how many rooms we have in hotels and how we arrive at matches.”

Tuchel: Increasing travel budget not about ‘bling-bling’
Chelsea’s new licence limits the club to spending £20,000 per away match on travel, though the Blues are looking to increase that figure in discussion with the government.

It is understood in normal circumstances, their trip to Middlesbrough for Saturday’s FA Cup quarter-final would cost in the region of £60,000, significantly higher than that figure.

Tuchel admitted Chelsea have already had to cut their cloth accordingly ahead of Wednesday’s Champions League last-16 second leg in Lille.

But the Blues boss insisted Chelsea’s demands are not about luxury, but instead about elite athletes avoiding possible soft-tissue injuries amid a packed schedule.

“For that, it is better to arrive with a plane rather than a bus.

“From my understanding, we have a framework to go and play in Lille with absolutely no excuses.

“Regarding these organisations, it is already more difficult to arrange things on a professional level, in the best way possible, for the FA Cup.

“But we will deal with it. As long as we have shirts and are ‘alive’ as a team, we will be competitive and fight hard for our success.

“We owe it to the people who support us. Of course, we are in the spotlight and it is our responsibility to do so. We will do it.”

Havertz willing to pay for travel

Chelsea forward Kai Havertz said he would be happy to help pay for Chelsea’s travel to away games.

“I would pay it, it’s not a problem,” he said. “That isn’t a big deal. For us to come to the games is the most important thing.

“There are harder things in the world right now than if we have to take the bus or plane to an away game. I would pay, no problem.”

Asked about the ongoing war in Ukraine, Havertz said: “You see these images and think these things happening are not possible.

“It’s the worst thing that can happen on the planet. We all stand for peace. It is difficult for me to talk about it. People ask us because we are public people and they want to know what we think.”

“We are here at Cobham playing football, doing what we love, but there are bigger things happening right now than us playing football. You see these images and you can’t believe it. It’s tough to speak about it, I’m not a politician.”

“We are professionals and sometimes a situation like this can happen. It’s not easy for us, for the whole club and the fans. What we can do is to play good football and try to give the fans a smile in this situation. As we showed at the weekend, we can handle these situations.”

“We have to focus on our matches and that’s all we can do. All the other stuff, the club has to sort it out and it is not about the players.”