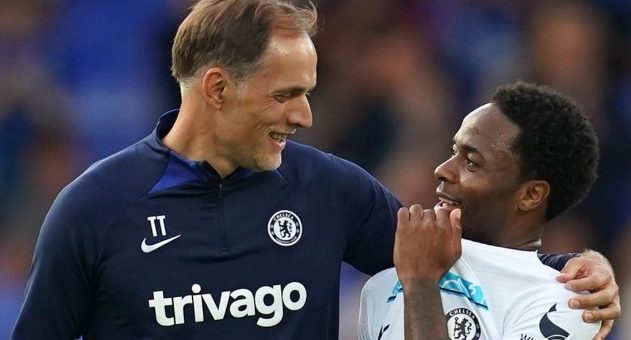 Chelsea boss Thomas Tuchel says he will be a “happy coach” after September 1, no matter what happens in the rest of the transfer window.

The Blues are still being linked with a number of players, including Anthony Gordon, Wesley Fofana and Pierre-Emerick Aubameyang, and Tuchel admits he would like

more options among his squad .

However, he will not be spending too much time reflecting on who he could have signed this summer once the deadline passes at 11pm on Thursday.

“Right now, we could need some more players in some positions,” Tuchel said in his pre-Southampton press conference.

“But it’s very close to the end of the transfer window and when the first of September comes, I will be a happy coach no matter what happens, and I will try to find solutions, not think about what could have happened.

“Everything that matters in reality… In Southampton, we will find a way to win, to step up individually and push the team from my side. This is what we will do whether players come in or not.

“We hope to have 60 matches [this season], but we need to have a squad where everybody is ready to play and hopefully we will have a lot of difficult decisions to make.

“There are not enough tough decisions at the moment, I would like to have more of these decisions. That would mean we are in full competition mode.”

There could also be outgoings at Chelsea, with Callum Hudson-Odoi poised for a season-long loan move to Bayer Leverkusen.

Other players may have their heads turned in the final few days of the window, which Tuchel accepts, but says he expects 100 per cent commitment from the players still at the club once the deadline passes.

He added: “It’s maybe human if there is a transfer window and they are not only with us at Cobham, so once they leave the building, they will have their phone on and they will get calls.

“They will think about their futures, their next steps and there is a World Cup coming, which everybody talks about and thinks about.

“At the moment, I accept that it is like this, but from the first of September, there are no more excuses and no more distractions. I’m very happy when the transfer window is over because then we have different leverage to push players and the commitment has to be here 100 per cent. We will not accept 99.

“But the reality is that sometimes in the last few days of the transfer window that you have to accept it no matter what you wish for.”

Fofana set for Chelsea medical ahead of £70m move

Wesley Fofana is set to undergo his Chelsea medical on Monday ahead of a £70m move from Leicester.

Fofana has reportedly flown to the USA for the tests.

According to The Athletic, this is for new owner Toddy Boehly’s “peace of mind” after Fofana’s serious injury last season. He missed most of the campaign due to a fractured fibula.

Chelsea and Leicester reached a verbal agreement on Friday after a protracted saga over his valuation. Leicester had wanted more than the £80m they got from Manchester United for Harry Maguire.

This had frustrated the player and he was left out of the last two games against Chelsea and Southampton.

But Fofana is now expected to sign a six-year deal as a Chelsea player and fulfil his dream of emulating Didier Drogba by playing for the club.

Earlier this year, American businessman Todd Boehly agreed a £4.25bn deal to buy Chelsea and quickly set about investing for both the long and short term. The arrivals of Raheem Sterling, Marc Cucurella and Kalidou Koulibaly strengthened the first team, whilst a combined £50 million was spent on bringing in youngsters Carney Chukwuemeka, Gabriel Slonina and Cesare Casadei.

Chelsea have spent heavily, but the fact is they had to. With the departures of Lukaku, Antonio Rudiger, Andreas Christensen and Timo Werner, The Blues have been left bereft of options both in defence and attack.

Fofana looks to be next, and potentially Pierre-Emerick Aubameyang. It will be a key few days for Boehly and Co in the transfer market, and it could have a major impact on their prospects this season.

Chelsea are currently attempting to place square pegs in round holes, with Reece James and Ruben Loftus-Cheek playing out of position, a consequence of Chelsea’s failure to bring in another centre-back and a striker. James has adapted well to his new role, but it is clear his attributes are best served by playing wing-back, and this, in turn, is holding back Chelsea’s attacking play.

Fans know a title challenge is probably beyond them. Chelsea have replaced but not revolutionised their squad, and with Tottenham and Arsenal on their heels, a top-four finish would be deemed acceptable. But another year of transition, and a distinct lack of progress, despite heavy investment, might make fans question the club’s direction and Tuchel’s credentials.