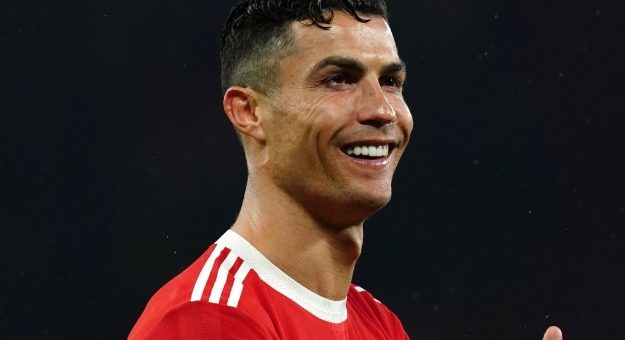 Cristiano Ronaldo has insisted he is “very happy” to remain at Old Trafford and believes Manchester United will rebound from a dreadful 2021/22 campaign under new manager Erik ten Hag.

Ronaldo returned to United last summer, 12 years after originally leaving the club for Real Madrid, and netted 24 goals in 38 games to finish as the club’s top

scorer in all competitions.

But while it was a strong campaign in front of goal for the 37-year-old, it was an unimpressive one for the team, with United finishing sixth in the Premier League and failing to lift a trophy for the fifth successive season.

Ronaldo has played in the Champions League for 19 consecutive campaigns and United’s failure to qualify for the competition has led to speculation the Portugal international could leave Old Trafford for a second time.

But speaking in an interview with the club, Ronaldo said: “I was happy, of course, to be back in a club that really raised my career, so it was unbelievable, the feeling when I came back again. It was nice to feel the supporters – the happiness of them was great.

“I was and still am very happy to be here, and what I have to say to the fans is they are amazing. Even when we lost games, they always support us, they always are with us. The supporters are always in my heart and it’s the people that we all should respect because they are always on our side.

“For me, the most important thing is to try to win the games and try to win some championship or some cup but I believe that Manchester will be where they belong. As I say before, sometimes it takes time but I still believe.”

United’s underwhelming season came under the stewardship of Ole Gunnar Solskjaer, who was sacked in November, and interim manager Ralf Rangnick, who exited the club at the end of the season despite previously agreeing to stay on as a consultant.

Ten Hag has stepped into the managerial void after leading Ajax to the Eredivisie title, and Ronaldo says the Dutchman should be given time to turn around United’s fortunes.

“I know he did a fantastic job for Ajax and that he’s an experienced coach but we need to give him time,” said Ronaldo. “Things need to change the way he wants.

“We are happy and excited, not only the players but the supporters as well. I wish him the best and let’s believe that next year we’re going to win trophies.”

A rare bright spot for United this season was the performance of their U18 side, who won the FA Youth Cup last month for the first time in 11 years.

That success, plus a desire to pass on the lessons he has learned during 20 years as a professional, means Ronaldo is keen to see United’s current crop of youngsters given opportunities to impress Ten Hag.

“I’m in favour that we should give opportunities to the young generation, of course, because they will be the future,” explained Ronaldo. “But you have to help them as well to put it in the right spot, because the pressure is a lot to play in the Premier League, which I believe is the most difficult league in the world by far.

“You have to give them time, give them the opportunity, and let them grow in a normal way without pressure, but I think we should give opportunities to the young generation.

“They understand to achieve success you have to [make] sacrifices, hard work, ethic of work, dedication, but of course if the kids ask my advice I will give my opinion and advice because I want to help.”

Erik ten Hag’s commitment to swerving a holiday and getting stuck in straight away as manager of Manchester United tells the story of the scale of work he has to wade through.

The 52-year-old inherits a squad, which requires a significant overhaul, having delivered the worst Premier League season in their history.

That almighty task needs to be done amid a restructuring of the organisation – including recruitment – behind the scenes as United seek a “detox of underperformance”.

By consequence, it is a much leaner list to assess what the club doesn’t require this summer.

Let’s drill down into the squad itself, which features 21 players signed by five different managers with no underpinning stylistic or age profile.

The club are open to offers for Aaron Wan-Bissaka, and Harry Maguire retaining his place in the starting XI – let alone the captain’s armband – is in jeopardy. Marcus Rashford has been horribly off form and Bruno Fernandes switched from a transformative figure to a largely frustrating one.

United’s attack cannot solely be propped up by Cristiano Ronaldo, while the midfield has lacked offensive protection and progression. There is not a position free from needing strengthening.

United require an elite anchor, a dynamic central midfielder, a high-quality forward, a commanding and aerially dominant centre-back that is comfortable defending large spaces, new full-backs and another attacker as a foil for Jadon Sancho.

Ten Hag has a clear football ideology, which is helpful in building a recruitment profile. Sky Sports News has been told he wants “more technical, aggressive, quick-thinking players” that have a “deep responsibility to work without the ball and for each other”.

Given the sizeable changes to scouting operations and the lack of football negotiation nous, it will be interesting to see how United manage extensive outgoings and incomings.

The absence of Champions League participation also puts the club at a disadvantage, but United believe Ten Hag’s continental exploits with Ajax and his ability to improve players will prove attractive enough for their targets.

Another element being sold to potential recruits is the opportunity to “write a new Manchester United story.” Ten Hag will oversee a considerably different squad and is expected to introduce a change of culture and increased discipline to what has been a toxic, divided environment.