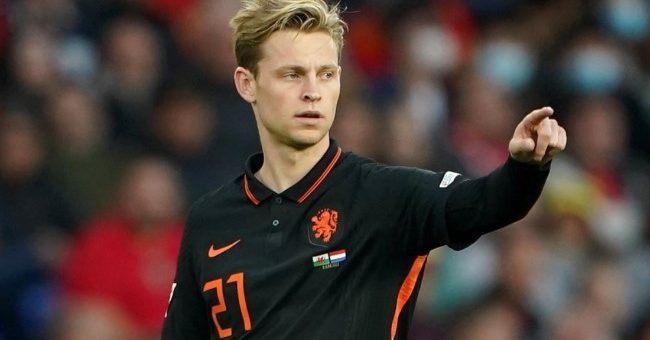 “The intention is to play fantastic football,” he said. “The way we did it [at Ajax] – with dominant, dictating football – that is the way I want to act in Man Utd as well.”

But there was also the caveat.

“The competence and quality of the players decide how you have to play.”

If Ten Hag is to replicate the patterns, style and approach he fostered to critical acclaim at Ajax with Manchester United, then the feeling is there will need to be significant changes at Old Trafford.

During his tenure in Amsterdam, his Dutch side controlled possession and swarmed over opposition teams when they didn’t have the ball.

In contrast United have become the team too-often overwhelmed by opponents. Last season they were frequently passive, unable to win or use the ball effectively enough as they slid to a disappointing sixth place.

They were also sixth in the standings when it came to possession, passing accuracy and goals from open play, indicative of their lack of authority in games, compared to the league’s top sides.

They had the ball for just 28 per cent of the time at Liverpool in April after managing just 30 per cent possession against Man City in March. In fact, seven of Manchester United’s 10 lowest possession totals in the Premier League era have come in the past three seasons.

While there are major issues to resolve at both ends of the pitch – seven teams out-scored them, only four conceded more from open play – it’s clear a weakness in central midfield contributes to all of these problems.

“We know the areas they absolutely need to actually strengthen,” Gary Neville said when asked by the official Man Utd website for his views on their transfer priorities this summer. “Central midfield is an absolute necessity. An absolute necessity. Manchester United need midfield players.”

Scott McTominay and Fred have long been criticised as not good enough to run that area of the pitch. “As long as those two are playing in midfield for Man Utd they will not be winning big trophies,” Roy Keane told Sky Sports in May 2021. Now, with Paul Pogba and Nemanja Matic leaving the club, a solution is desperately needed.

Barcelona’s Frenkie de Jong is an attractive option. The stylish midfielder does his best work from deep, stepping past challenges or threading a pass through the lines to move his team up the pitch.

He rarely gives the ball away. He had a 91 per cent passing rate in La Liga last season and, as well as that metric, also eclipsed McTominay and Fred in stats measuring dribble success, touch quality and how often they are dispossessed.

De Jong may not be the sole answer to United’s problems but he would bring an upgrade to their central midfield department and unlock a way of playing Ten Hag desires.

There is also the tempting possibility of Ten Hag being able to rekindle the Ajax connection between De Jong and returning loanee Donny van de Beek.

Van de Beek has had a frustrating time in English football so far. Four Premier League starts for United and five on loan at Everton is a mystifying return for a player who so impressed, alongside De Jong, during Ajax’s run to the semi-finals of the Champions League just three years ago.

United could certainly do with a major uplift in that area of the park. Central midfield has been a key problem for seasons – and finding an improvement will be essential to Ten Hag’s hopes of delivering the style of football he wants at Old Trafford.