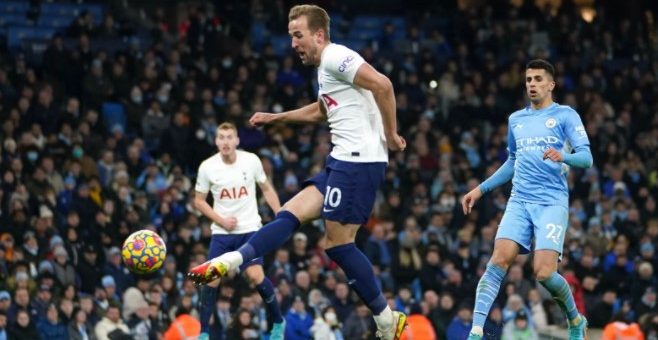 Harry Kane has revealed Tottenham’s players “couldn’t be happier” working under Antonio Conte and has vowed to “give the top four a real go” between now and the end of the season.

Spurs have lacked consistency under their

Italian manager and currently lie eighth in the Premier League, six points behind arch-rivals Arsenal in fourth having played one game more.

And in an exclusive interview with Sky Sports ahead of Spurs’ trip to Brighton on Wednesday, Kane has echoed Conte’s recent claims that Tottenham’s rebuild is not a quick fix ahead of a crucial season run-in.

“Obviously I still feel like we’re in a process,” he said. “We went two or three years challenging for trophies then we dropped off over the last couple of years. With Antonio, he’s building a culture that he wants to be and wants to put us back in that place.

“The Premier League, it’s such fine lines between challenging or being top four or being sixth, seventh or eighth. Every team is getting better and there are no easy games.

“Of course the manager is working as hard as he can and the players are working. It’s not a quick fix that happens overnight, it takes time and understanding. He needs to talk to the club and chairman and to see what direction we need to go as a club. We can’t speak highly enough of him.”

Kane: I’m only focused on the run-in
Kane nearly quit Tottenham last summer, with Manchester City pursuing the England captain – but a move never materialised and the 28-year-old committed to the north Londoners.

Last year’s Premier League Golden Boot winner got off to a slow start to the season, with one goal in his first 15 matches – but has now hit back with 10 goals in his last 13 top-flight appearances.

Speculation over Kane’s future will likely mount again should Tottenham fail to qualify for next season’s Champions League, but the England captain maintains that he is only focused on the top-four race, which starts at the Amex Stadium on Wednesday night.

“I’m the first to look at my own standards,” Kane added. “In the Premier League, towards the first few months or so I wasn’t at the standard that I was always reaching.

“It was no time to panic or sulk, it was a time to work hard and since Antonio’s come in, we’ve had a good understanding with each other. As a player, if you’re improving under a coach, that’s the most important thing.

“It’s when you’re there and not sure where you’re going and where the club’s going and that’s the hardest part as a player. I definitely feel like I’m improving and the team is with Antonio. That motivates you to be even better. Hopefully we can end the season and give the top four a real go.

“Obviously it’s always an aim to get in the Champions League, for the club. Personally, you want to be in the best competitions in the world. My focus is on this year, getting top four is the most important goal for us now.

“There are 11 games left and if we can get on a run, this is more than possible. That’s all I can control and that’s all the manager can control as well. Let’s see where we end up.”