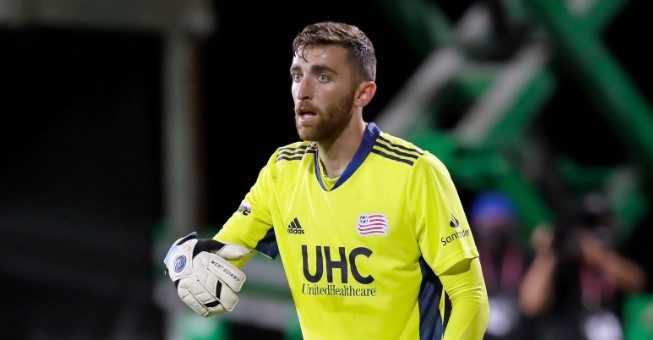 New Arsenal goalkeeper Matt Turner admits he has been signed by Mikel Arteta as a back-up to Aaron Ramsdale but vows to push the England international all the way.

The New England Revolution shot stopper agreed a move to the Gunners back in February but has spent the last few months playing for his MLS side.

The American international will report for Arsenal duty next Wednesday where he will complete his medical and finalise the move, but will accept his role to Ramsdale’s understudy for the forthcoming season.

Asked about the perception of him playing a back-up role at the Emirates Stadium, Turner told Sky Sports News: “I can see why they’d assess it that way. Aaron had an amazing season for Arsenal and played well all year.

“We’ve talked a little bit,” Turner said when asked if he has spoken to Gunners boss Mikel Arteta. “His main message for me was just to focus on what I need to focus on right now, getting through these next few months, staying healthy, staying fit and getting ready for pre-season and compete.

One of Ramsdale’s major strengths is his ability to play the ball out of the back with his feet, a skill that Turner is not totally fluent in – but the American admits he is getting better at his distribution through his work with the United States national team.

Asked if playing out the back is something he wants to do at Arsenal, he said: “Definitely, the DNA of this team is possession-based and I believe that’s what they will expect from me when I get on the pitch.

“It’s the area of my game that some call a weakness but one where I’ve improved over the past few months. I’m connecting a few more passes, reading the game better and understanding the way I can hurt teams a lot better.

“I’m excited to be at Arsenal to do that every single day instead of two or three weeks here or there.”

Turner’s arrival in north London next week could be part of a busy few days for the club. Arsenal are close to announcing the £34m signing of FC Porto midfielder Fabio Vieira – and are optimistic about signing Manchester City striker Gabriel Jesus, rated at £50m.

The Gunners have also signed teenage Brazilian winger Marquinhos from Sao Paulo for £3m – and boyhood Arsenal fan Turner – who enjoyed watching the likes of Wojciech Szczesny, Mesut Ozil, Olivier Giroud and Alexis Sanchez don the red of the club – is pleased about the fellow new faces potentially set to join him at the Emirates.

“I have high expectations, this is a club that is investing heavily in some of the player transfers and I am somebody who wants to win,” he added. “I know the fans do as well. My expectations are the same as the fans want.”

Porto confirmed the deal to sell midfielder Vieira to Arsenal for £34m including add-ons, in a statement on Friday.

Vieira will add further creative talent to Arsenal’s ranks, with the highly-rated midfielder having laid on a league-high 14 assists in the 2021/22 Primera Liga campaign.

Arsenal are yet to announce the signing but Vieira was understood to have been in north London on Thursday for a medical.

The Gunners have since cooled their interest in Youri Tielemans making it more likely the Belgium midfielder will sign a one-year contract extension at Leicester.

Meanwhile, Arsenal are “cautiously optimistic” of getting a deal for Manchester City’s Gabriel Jesus over the line.

The north London club put in nearly six months of work with the forward’s representative Marcello Pettinati to ensure they were in pole position to recruit him from the Premier League champions this summer.

Jesus indicated his desire to move to the Emirates at the start of June and the only hindrance so far has been the distance between the valuations of both clubs.

Arsenal will start their 2022/23 Premier League campaign away at Crystal Palace on August 5, live on Friday Night Football.

Mikel Arteta’s side, who finished fifth in the Premier League last term, will then host Leicester City on August 13 before travelling to newly-promoted Bournemouth on August 20.

The Gunners’ first north London derby will take place at Emirates Stadium on October 1, while the return game at Tottenham Hotspur Stadium is early into the new year on January 14.

Arsenal’s final game before the season pauses for the winter World Cup will be away to Wolves on the weekend of November 12/13. They will then return to action on Boxing Day, entertaining West Ham.

The final day of the Premier League season is on May 28, where Arsenal will close out their campaign at home to Wolves.