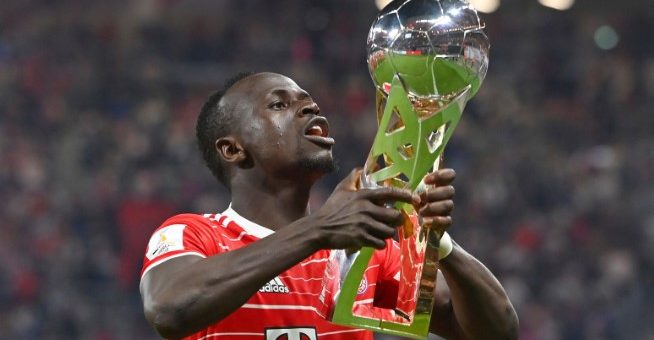 Sadio Mane has made a quick impression at Bayern Munich, that much is clear. He scored one and had two goals disallowed in the club’s entertaining 5-3 Super Cup win over RB Leipzig on Sunday. One trophy and lots of fun had already.

That was the overriding emotion from Jamal Musiala

when putting the Mane question to him in the mixed zone after the game in Leipzig. The young midfielder’s eyes lit up. “He is an amazing player and a very nice guy as well,” Musiala told Sky Sports.

“As soon as he came into the team he felt welcome. There was no awkwardness. He fitted right into the family. Whenever he is on the pitch we can all have fun. He is amazing, his one-on-one dribbling, his scoring, his ideas. It is just fun when he is on the pitch.”

Mane certainly seemed to be enjoying himself, although the goal itself, late in the first half, was a curious one. His reaction as the ball hit the net was delayed for a moment. It was as if even he could not believe the space in which he found himself inside the box.

The hugely impressive Musiala had broken the defensive line and Serge Gnabry’s centre had made the finish simple. If his Bayern teammates keep laying goals on like this then maybe Mane could yet match Robert Lewandowski’s extraordinary output.

But the real story of his summer move is that he will not need to.

Lewandowski averaged over 50 goals per season in his last three years at Bayern before his contentious transfer to Barcelona last month. Mane offers something else. There is excitement surrounding him. A genuine belief that he might make Bayern better.

It is a view that appears to be shared by his new teammates, his coach, the money men at the club and even legends like Lothar Matthaus. “I like him very much,” the former Ballon d’Or winner told Sky Sports. “I think he is somebody who can make the difference.”

That pressure was on Mane in Leipzig. Even at Liverpool, the spotlight was never quite like this. Loud cheers greeted his entrance. The big screen focused on him. The Bundesliga ‘star cam’ followed his every move. He was last on the pitch but leading the line.

The sense is that a superstar has arrived.

Jung is on the board at Bayern. He is a man with a marketing background and an international focus. The prospect of an uplift in interest across Africa has not escaped him. The global appeal of Mane has already been noted, even at a club as big as Bayern.

“On our summer tour in the United States, he received just as much applause as Thomas Muller, which is important for our club because we always need a mix of international stars and popular figures who embody our Bavarian identity.

“Sadio is not only a good sporting fit for our club and its values, but his down-to-earth nature and overall character are also extremely well received by our fans around the world. He is outstanding in sports and communicates values in an authentic and credible way.

“The fans love such players and that is the kind of player every club wants. He underlines the charisma of FC Bayern and is a figurehead for the entire Bundesliga brand.”

Off the pitch, the signing appeals.

On the pitch, it makes even more sense.

For Julian Nagelsmann, the 35-year-old Bayern head coach, last season was little more than a qualified success. Winning the Bundesliga title was the bare minimum and a Champions League quarter-final exit to Spanish side Villarreal fell below that.

There was a sense that this was not quite his team.

“Bayern Munich have been playing for the last 10 to 15 years with the system 4-2-3-1. With Lewandowski and before that with Miroslav Klose. Always with a No 9. Now, Nagelsmann will not play with a No 9. We will see how he was playing with Leipzig in a 4-2-2-2.

“His team is different. At Leipzig, he was playing with two strikers – Timo Werner and Yussuf Poulsen. One was going left and one was going right. Another was coming from the midfield into the box. I think he will have more flexibility without Lewandowski.

“He has got another quick player in Mane. His philosophy of football is coming closer with Mane and Gnabry or maybe sometimes playing Leroy Sane or Kingsley Coman. He has a lot of options and I think Julian will be happier with this team now than his team last year.”

Already there were signs of that shift in style in Leipzig. Eleven minutes in and Mane was closing down the goalkeeper to win a throw-in. “He likes to give the signals for the pressing, he was communicating immediately with the other players,” adds Matthaus.

These are qualities that were drilled into the Senegal international during his six seasons in Liverpool and before that in Salzburg and Southampton. When left-back Marcel Halstenburg tried to counter-attack, it was Mane who went in pursuit to prevent it.

“He not only has quality but he has also a good mentality. He is not shy, he is not afraid. He is powerful.”

He did the hold-up work, routinely spreading the play wide to Benjamin Pavard. But he would also evacuate the central zone to leave space for Muller to run into. He took up interesting positions to the left and to the right. Classic Mane and a more fluid Bayern.

The biggest beneficiary might just be Musiala. At 19, the ceiling for his potential has not yet been hit and operating in a roaming role from the left in Nagelsmann’s 4-2-2-2 system, it could be sky high. He was the obvious man of the match for Bayern at the weekend.

“Left side as a 10, it is pretty open, you can always go out wide or come inside and rotate,” said Musiala. “There was space inside for me to turn and dribble into and create. It is very flexible how we play. Our offence is flowing very nicely and we can create lots of chances.”

And the presence of Mane helped that.

“Anyone can combine with him. He is amazing.”

That is why, on this evidence, the mathematics behind the loss of Lewandowski’s 50 goals per season might not be as straightforward as it seems. The hope – the expectation, even – is that Bayern will be able to find those goals from elsewhere with Mane up front.

“I think Lewandowski will be missed with all the goals that he scored. It is not easy to find a player like that. But I think we have an amazing squad and we will spread the goals out between all of us. We will have to find offensive solutions apart from Lewandowski.

“We did that here and we will have to continue to do that. Today, everything went well. When everything is flowing and everyone is having fun then things go our way and people try things. As a team, we played very well. We have lots to look forward to.

“This was just the start.”