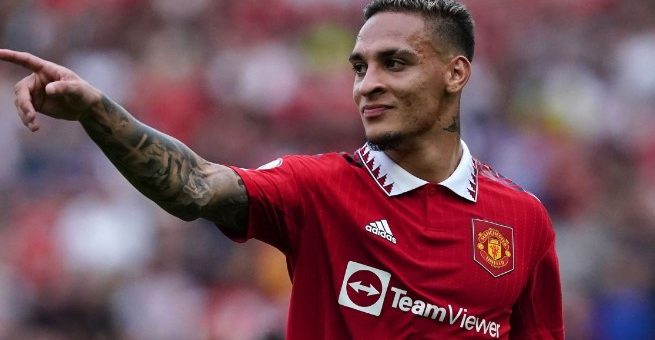 As Antony wheeled away in celebration, screaming in delight and thumping the badge on his chest, Cristiano Ronaldo rose to his feet in the dugout, hands above his head to applaud a goal which might just mark the beginning of a changing of the guard.

Antony, the club’s £86m Deadline Day signing from Ajax, marked his Manchester United debut with a clinically-taken strike which set Erik ten Hag’s men on their way to a fourth consecutive victory.

The Brazilian had only had a couple of training sessions with his new team-mates but it is a testament to how highly Ten Hag rates him that he went straight into the team to face Arsenal.

“He knows how we want to play,” shrugged the Manchester United manager, his coach for two seasons at Ajax, shortly before kick-off.

“He knows what we expect and demand from him. He can be a real threat in one-on-ones with his speed.”

And so it proved.

The fee, the second-highest Manchester United have ever paid, brings with it considerable pressure but Antony looked unfazed from the outset. His early touches were sharp and there was impudence to his play too. A backheel to pick out Diogo Dalot. A shimmy to win a foul off Gabriel Martinelli.

Antony was not afraid to try things and he lost none of his swagger when they did not come off.

His first attempt to carry the ball into Arsenal’s box ended in him being dispossessed by Gabriel Jesus. His first shot, having cut inside onto his favoured left foot, sailed high into the stands.

Still, though, he kept demanding the ball and kept getting it too. Manchester United supporters will be encouraged by how effectively he dovetailed with Marcus Rashford in particular.

There was industry out of possession as well.

When Arsenal seized control of the game in the first half, and Antony began to see less of the ball, he showed a willingness to track back, drawing raucous cheers from the stands with a firm tackle on Martinelli deep in his own half.

Those cheers were nothing, though, in comparison to what came next.

Antony’s goal, less than a minute after that challenge on Martinelli, caused Old Trafford to erupt.

It was beautifully worked, Christian Eriksen picking out Bruno Fernandes, who moved it onto Jadon Sancho and then Rashford. All the while, Antony, stationed high and wide on the right, watched Oleksandr Zinchenko get sucked inside and saw the space open up around him.

He timed his run well, ensuring he was the right side of Arsenal’s defensive line as he ran onto Rashford’s pass, and his first-time finish, curled into the far corner, gave Aaron Ramsdale little chance. “It’s a dream position for Antony,” said Sky Sports’ Gary Neville.

His confidence only increased after that.

Zinchenko, subjected to showboating from the 22-year-old earlier in the game, was dispossessed and then screamed at as Antony showed he has fire as well as quality. “A little bit of petulance,” said Neville after he took a swipe at Granit Xhaka.

There was audacity – most evident when he attempted to lob Ramsdale from a full 45 yards out, forcing a back-peddling save from the Arsenal goalkeeper – but glimpses of intelligence too.

Antony specialises at beating his man but he knows when to play it safe and find a team-mate, as he did when he picked out Fernandes with a clever pass between two Arsenal players shortly before half-time.

It helps, in that sense, to have the spent the past two seasons playing the Ajax way, and, of course, doing it under Ten Hag.

“I think we have all seen what a threat he is,” the Dutchman told Sky Sports afterwards.

Antony’s contribution ended earlier than he might have liked, his substitution for Ronaldo just before the hour mark a reminder that it may take a little time to adapt to the physical intensity of the Premier League. But his 58 minutes on the pitch were enough to show he can give United something different.

“We missed a player on the right wing, because all the players who can play there, like Jadon Sancho, like Marcus Rashford, they prefer more the centre or the left side,” said Ten Hag.

“Now, we have the one who can play really well over on the right wing. That was a missing link.”

What is most exciting for Manchester United supporters, though, is that this is just the start for him.

“Today, his first performance here, he did well, but I think he can step up,” added Ten Hag. “I know him from Amsterdam and I know this is a different league, but there is potential and he will be even more of a threat to opponents than he was today.”

That is a tantalising prospect for Manchester United but his goalscoring debut suggests they might have a new star on their hands already. Ronaldo’s reaction suggests he agrees.