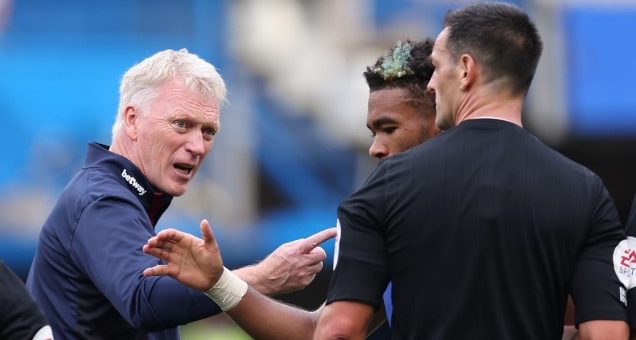 At the end of VAR’s toughest weekend since it arrived in the Premier League, former referee Dermot Gallagher gives his verdict on the big decisions – and the news that the top flight has called for an investigation into the technology’s usage.

INCIDENT: Martin Odegaard plays Gabriel Martinelli through to finish off an early opening goal at Old Trafford. However, VAR takes two minutes and 18 seconds to rule the Norway midfielder fouls Christian Eriksen in the build-up, and disallows the goal. Odegaard later tells Sky Sports it was “never a foul”, and Mikel Arteta criticises the decision as “soft”.

“I thought it was a foul during play, and when the VAR checked it I was quite confident it would be overturned. It was very early in the attacking process but there was no chance to reset.”

INCIDENT: Virgil van Dijk catches Amadou Onana on the shin after he is beaten to a ball forward. Referee Anthony Taylor immediately awards Van Dijk a yellow card, and the decision is not reviewed by VAR. Everton manager Frank Lampard later says Van Dijk should have been sent off over the incident.

DERMOT SAYS: “I think it’s a yellow card. He goes down but the maximum impact comes on top of the foot. Because he’s come a short distance, he hasn’t got the speed and intensity. The biggest point of impact is on the bottom of the foot.

“I think it’s a foul and a yellow card. I don’t think it’s a red card. We saw a similar tackle with Fabian Schar last week [against Wolves], where we agreed we felt that wasn’t a red card.”

INCIDENT: Maxwel Cornet scores a stunning late equaliser for West Ham to bring them back to 2-2 at Chelsea. The goal is disallowed after a long VAR review, during which Andy Madley is sent over to the review monitor, for an alleged foul on Edouard Mendy by Jarrod Bowen, despite what appears minimal contact. The PGMOL later the decision was made in error, while West Ham manager David Moyes calls it a “ridiculously bad decision”.

“He’s got everything in front of him, he can see Mendy on the floor and he’s seen Bowen. He’s got all the information he needs. I know that when you go to VAR, you can be advised to see things from a different angle to make a different decision. But when he went to VAR, he saw the same images.

“He saw the same angle, so I don’t know what changed for him. The VAR felt the goalkeeper was injured and he didn’t have the same feel that Andy Madley had on the field. That’s what played a major part in this. The goalkeeper on the ground took priority over the decision itself. I think the VAR focused on the goalkeeper, thinking he was injured.”

INCIDENT: Tyrick Mitchell nods into his own net after a header is knocked back across goal from a Kieran Trippier free-kick. VAR sends referee Michael Salisbury to the review monitor, after which he changes his decision and disallows the goal for an alleged foul by Joe Willock on goalkeeper Victor Guaita, even though he appeared to be pushed into him by Mitchell. The PGMOL also later admits this decision was an error.

DERMOT SAYS: “I think when the VAR has looked at it, he’s focused on the point of Willock going into Guaita as he’s gone to clear the ball and it looks a foul. What he hasn’t done is focus on the whole outcome. If he had looked at the arm of Mitchell, that is where the foul occurs.

“It raises all kinds of issues. Referees are all about options and the best referees don’t close their options. He can either give a goal – which is risky as the ball isn’t in the net when Willock collides with the goalkeeper, so I think you can’t do that.

“He could give a penalty, for the push from Mitchell on Willock, this I think it is. Or he can take the option he did – which I think is the worst option. But that option has arisen because he was driven down a very narrow path of not viewing the whole incident.”

INCIDENT: After Ivan Toney is earlier awarded a penalty following a VAR review, Crysencio Summerville appears to be fouled in the Brentford box by Aaron Hickey, but there is no such review of the incident. Leeds manager Jesse Marsch gestures referee Rob Jones towards the review monitor, and is sent off for his reaction. He later calls the two decisions a “lack of respect” over their consistency.

DERMOT SAYS: “The initial shirt pull, the referee doesn’t see. As it’s outside the box, the VAR can’t act, and once he goes into the box he releases the shirt.

“It comes back to what the threshold is – which is the dilemma we’ve been having today. If the Brentford player was still pulling the shirt into the box, without doubt it would’ve been given as a penalty.

“Then he’s looking at whether the player has clipped him on the foot or whether he is moving forward. It’s a ‘maybe’ – and you can’t give a penalty for a ‘maybe’.

“On this point, there is an element of doubt. The match officials felt it didn’t hit the threshold so they played on. The referee had a perfect view in real time so he doesn’t need to be referred to VAR. He doesn’t even consider a penalty.”

INCIDENT: Alexis Mac Allister scores a 30-yard thunderbolt to give Brighton a 3-2 lead over Leicester two minutes after half-time. The goal is overturned by VAR for an offside against Enock Mwepu’s attempted overhead kick in the build-up, although the midfielder does not connect with the ball or appear to affect James Justin’s headed clearance towards Mac Allister.

DERMOT SAYS: “The problem was that they needed to establish whether the player was in an offside position. The next element to it is whether he impacts the defender’s attempts to head the ball out.

“The only person who can make that decision is the referee on the field. The factual part of offside then goes out the door here because the referee is then sent to the screen to decide whether the overhead-kick play a part in reducing the defender’s ability to head the ball clear.

“He felt the answer to that was yes – and I agree with him, which is a shame because it’s such a great goal. But if you watch it back, his boot is very high so the defender doesn’t get the connection he’d want.

“Because he came from an offside position, he has to be offside. The process is long because they had to go through each step. It’s unfortunate as it’s one of the best goals you’ll ever see.”

INCIDENT: Philippe Coutinho is denied what appears a perfectly fine goal for an erroneous offside decision. VAR is unable to overrule the assistant referee’s flag, as the whistle has already gone before Coutinho’s shot crosses the line.

“Referees are encouraged to let the game flow, but bear in mind that Coutinho came back six, seven or eight yards to fetch the ball.

“At that point, if the referee has seen an assistant’s flag… even if he’s encouraged to delay and delay blowing his whistle, given how long it took for Coutinho to come back, in your mind you’re always going to whistle.

“By the time Coutinho shot, the whistle had long gone.”